Basis and application in each chromatography mode

Ion exchange chromatography is a technique used to separate ionic molecules by differences in their net charge. Generally, resins (media), which have cationic or anionic groups, are used as stationary phases and the counter-ion added buffers are used as mobile phases.
In the sample application step, molecules with opposite charge to the media bind to them by ionic interaction. Next, in the elution step, by increasing the concentration of the counter-ions in the mobile phase, molecules with the lowest net charge are eluted first and those with higher charge are eluted later.

Charge variants of proteins are usually analyzed by ion exchange chromatography.
Monoclonal antibodies were separated by using BioPro IEX SF in salt gradient mode and in pH gradient mode. Sharp peaks of charge variants and isoforms were obtained in both modes.

Size exclusion chromatography is a technique used to separate molecules by their size. As a stationary phase, silica gels and polymers which have pores with a network structure are used and as a mobile phase, buffers which have high solubility and pH stability towards the compounds are used. Smaller molecules that can penetrate deeper into the pores are eluted later from the column while larger molecules which cannot enter the pores are eluted earlier from the column. 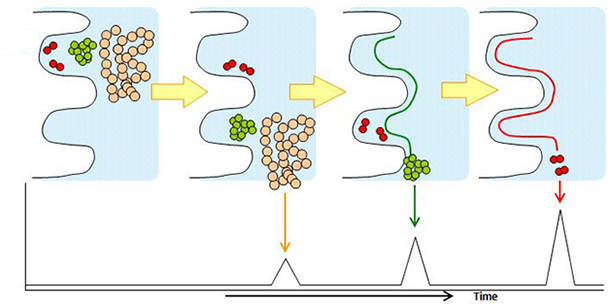 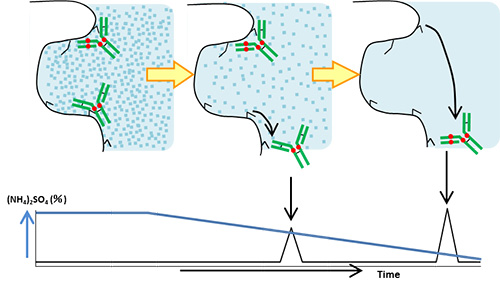 Hydrophobic interaction chromatography is used for separation of antibody-drug conjugates (ADCs) composed of monoclonal antibodies linked to small molecular drugs (payloads) because of the hydrophobicity heterogeneity of ADCs based on the drug-to-antibody ratio (DAR).
BioPro HIC HT showed good separation in the DAR analysis of ADCs.

Reversed-phase chromatography is a technique used to separate molecules by hydrophobic interactions between compounds and a stationary phase and between compounds and a mobile phase. Stationary phases include silica gels and hybrid silica to which hydrophobic functional groups such as C18, C8, and C4 are bonded are used, with mobile phases being mixtures of organic solvents and aqueous acid solutions or buffers. As the concentration of organic solvents in the mobile phase is increased, the molecules with lower hydrophobicity are eluted first. 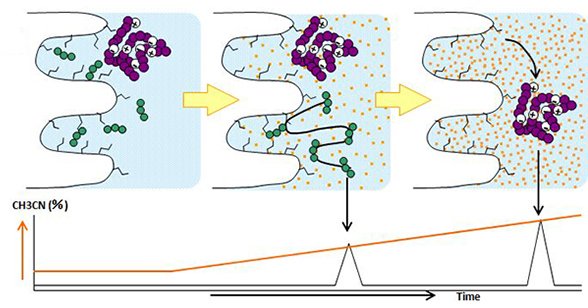 Reversed-phase chromatography is used for analysis of antibody fragments and peptide mapping.
Below are the chromatograms of monoclonal antibody fragments analysis with mobile phase containing either TFA or formic acid.
YMC-Triart achieves excellent peak shape even when using mobile phase containing formic acid. Therefore it is ideal for the high sensitive LC-MS analysis.